Dallas ISD Superintendent Stephanie Elizalde joined other Dallas ISD officials and members of the North Texas Congressional delegation this week for the announcement by the Environmental Protection Agency that Dallas ISD will be getting a $7.1 million rebate to purchase 25 new electric buses and the funds to build the infrastructure to charge them.

It will be some time before the zero-emission buses are added to the fleet of school buses, replacing old ones powered by diesel, but the excitement at the prospect of what they will mean for the environment and children’s health was palpable at the news conference.

“I can’t wait to see the new buses rolling down our streets, probably being quite a bit quieter than diesel, picking up our students with zero emissions and making the air even around where they wait for buses cleaner and more breathable immediately as well as for the future,” Elizalde said.

Someone else who is excited is U.S. Rep. Colin Allred, who used to ride the diesel school buses when he was a student in Dallas ISD. Allred is a member of the House Transportation Committee and worked on the Bipartisan Infrastructure Law that provides the funding for the Clean School Bus Rebate. Allred attended Dallas ISD through his graduation from Hillcrest High School, and his mother was a teacher with the district for 20 years.

“I know what it’s like to ride in a [school] bus, and back when I was doing it, they were loud, stinky and didn’t have air conditioning,” he said. “As someone who played a lot of sports, you would roll down the window and try to get a little bit of relief and you have diesel fumes coming at your face; it’s not so nice. I think it’s amazing that kids are going to get to go to games on these buses.”

Region 6 EPA Administrator Earthea Nance shared that the intent behind the competitive rebate—and the investment through the Bipartisan Infrastructure Law—is to reduce greenhouse gases as well as to protect children’s health by replacing heavily polluting buses with clean running ones. Dallas ISD is one of 13 urban and rural districts in Texas to receive a rebate.

Elizalde credited the Dallas ISD Board of Trustees for having the vision to move the district toward a greener, cleaner future with the unanimous approval of the Environment and Climate Resolution in 2020. Pursuing funding for the 25 electric buses is part of the goals set forth by the resolution. 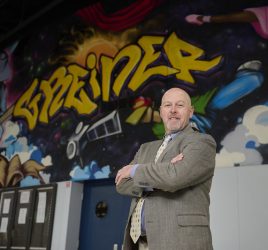 Transforming student lives in every moment

Go red for your heart