Seven Dallas ISD teachers were recognized on Wednesday, Nov. 28, for being selected for 2018 Texas Instruments Innovations in STEM Teaching Awards. Each receives $10,000 to divide equally between their classrooms and themselves.

STEM is shorthand for Science, Technology, Engineering and Mathematics.

The 2018 Dallas ISD recipients are:

Superintendent Michael Hinojosa said there are two Dallas ISD programs that the district leads nationally, but does not always get due recognition for. One is dual-language and the other is STEM. Both are programs he said he brags about when giving speeches throughout the country.

“I think we are best-in-class, especially for a big urban district,” he said. “And the fact that we’re honoring you, the best of the best, in the best-in-class program in the country, is really meaningful.”

Terri West, chairwoman of the TI Foundation board, said that since the awards program began 12 years ago, nearly $2 million has been awarded to teachers in six Dallas-area school districts. There have been 74 Dallas ISD teachers, including the 2018 winners, who have received a total of $865,000 in awards.

“Certainly part of it is for selfish reasons because science, technology, engineering and math are really important to TI,” West said. “But also we understand at the foundation what a STEM background – a STEM education – can do for a student. It truly can change a student’s life.”

West said a basis in STEM can boost a student’s earning potential but also give them the chance to spend their careers working on rewarding and exciting projects.

“We are so delighted to support a strong STEM program in our own back yard,” she said. “Congratulations to the winners, and more importantly, thank you for what you do. It makes a great deal to your students.”

Oswaldo Alvarenga, Executive Director of Dallas ISD’s STEM Department, listed the requirements to be considered for the TI award.

Candidates have to teach a STEM-related subject at the secondary level, be eligible for Distinguished Teacher Review in the previous school year, be nominated by their school’s principal, fill out an application and be subjected to a classroom visit.

“So it was a very rigorous process,” Alvarenga said. “After all the numbers were added up, this is how we came down to our seven.” 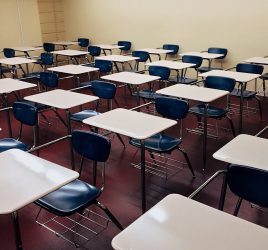